Organisation and assembly of the synaptic release scaffold

Exocytosis of neurotransmitter filled synaptic vesicles (SVs) is the major way of neuronal communication in our brains, and is catalyzed at special membrane domains called synaptic active zones by a rich, highly conserved molecular machinery. Exocytosis occurs with millisecond-precision and is triggered by the vesicular calcium sensor synaptotagmin, which is activated by calcium entering the presynaptic terminal in response to action potentials More info . Essential for the ultimate fusion reaction are so-called SNARE proteins, with the SV SNARE Synaptobrevin interacting with the target plasma membrane proteins Syntaxin and SNAP25 (also called t-SNAREs) to drive exocytosis. Proper SNARE complex assembly requires the docking and priming factors Unc18 and Unc13. More info here and here. Absence for any of these fusion machinery components (SNAREs, Unc18 and Unc13) will result in severe or complete impairment of SV fusion. More info here and here. Although the presynaptic terminus contains a large number of SVs, only a small fraction of them are release-competent. At steady state, merely ~5% of all SVs can be readily released and thus comprise the so-called Readily Releasable Pool (RRP). In order for SVs to enter the RRP, SVs first need to be docked i.e. physically attached close to the plasma membrane, and furthermore need to be molecularly primed in order to become fusion competent More info . Docking and priming depend on the SNAREs, Unc18 as well as Unc13. More info . RRP-sizes can be estimated by depleting stimuli like the application of hypertonic sucrose or action potential-train stimulation where exocytosis is much faster than RRP-replenishment. 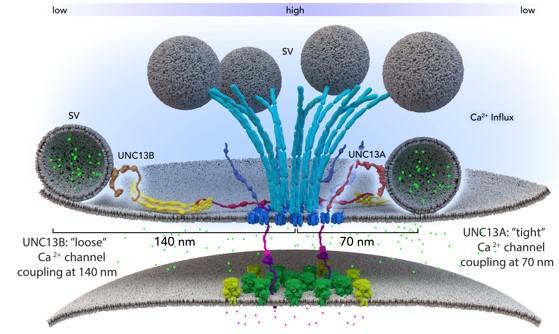 SV-docking occurs at a specialized regions of presynaptic plasma membrane close to voltage gated calcium channels which are collectively termed active zones . However, the core fusion machinery does not work in isolation. Instead, a specialized “molecular landscape” is defined by a set of conserved large multidomain proteins evolved to boost the efficacy of SV cycling. More info here and here . At some active zones, electron microscopic analysis identified long filaments tethering SVs at distances of 10’s to 100’s nm away from the plasma membrane. Such tethered SVs are suspected to be recruited for release during extended periods of action potential stimulation in order to withstand synaptic depression. However, whether in fact tethered SVs are directly involved in refilling the RRP during ongoing exocytosis has not been shown directly. Furthermore, the maintenance of high SV fusion rates at synapses not only requires the constant supply of fusogenic SVs, but likely also relies on mechanisms for effective retrieval of released SV components to clear “release sites“ .More info. The exact mechanisms which recruit SVs to fusion sites and subsequently couple SV fusion to endocytic processes (that might aid site clearance) are subject of intense investigation.

The Sigrist lab previously identified and functionally characterized two crucial active zone components in Drosophila, namely the ELKS family protein Bruchpilot (BRP) and the Rim-binding Protein (RBP) .More info . BRP is a long coiled-coiled domain protein, which forms an electron-dense body (T-bar) at the plasma membrane in the active zone center and extends into the cytoplasm in a vertical and horizontal manner. Stimulated emission depletion microscopy (STED) allowed us to show that the BRP N-terminus faces the active zone membrane to bind and cluster Ca2+-channels, while its C-terminus localizes more than 100 nm away from the active zone membrane. After loss of only the last 17 C-terminal amino acids, long-range tethering of SVs to the T-bar is completely abolished and SV release drops under repetitive action potential stimulation, leading to short-term depression.

Two different isoforms of BRP (170 and 190 kD) we found arranged in an alternating, circular pattern, and loss of either 170 or 190 kD BRP reduces both, RRP size as well as the number of SVs docked close to the T-bar pedestal. Our further analysis corroborated that this BRP mediated architecture provides fusion slots for SVs . We could further show that RBP is another component of the active zone T-bar, and that RBP is essential for efficient vesicle release in providing an environment for SVs to be placed in close proximity to the Ca2+-channels residing beneath the T-bar pedestal. Very recently, we also characterized the sub-active zone distribution of the fusion factor Unc-13 at Drosophila active zones . The unc-13 locus is essential for fusion at Drosophila NMJ synapses, with complete lack of Unc-13 leading to early (embryonic) lethality. Using specific antibodies and STED, we surprisingly found that two different Unc-13 isoforms (called A and B), diversified only in their N-terminal but not in their catalytically active C-terminal domain, localize to distinct clusters on sub-active zone level . On the one hand, Unc13A forms clusters close to the active zone center, just adjacent to RBP and within the reach of the BRP-C-terminus when projected in a planar fashion. On the other hand, Unc13B formed circular arrays of clusters clearly further away (about 150 nm) from the active zone core and outside the reach of the BRP C-terminus . As Unc-13 is indispensable for fusion, these results raise the intriguing possiblility that two distinct kinds of fusion sites might co-exist within single active zones of Drosophila NMJs. We here suggest to combine the genetic access and topological information we have established for Drosophila active zone proteins with a newly developed (“flash-freeze”) assay to perform “kinetics” of ultrastructural analysis. To this end, light-induced optogenetic stimulation of SV release will be combined with rapid high pressure freeze fixation, allowing the electron tomographic analysis of natively preserved active zones milliseconds after exocytosis. Simultaneous genetic, kinetic and ultrastructural analysis of active zone submodules will hopefully reveal how their synergistic function in targeting, tethering, fusion and endocytosis optimizes SV cycling. We are convinced that the Drosophila NMJ synapses are the ideal model where to study this.